If I am ever asked, “What are your career highlights?”, top of my list without hesitation, is having been involved in the project management and delivery of the James Turrell Kielder Skyspace in 1999/2000. I was the Kielder Partnership marketing and events officer at that time. I returned to work at Kielder on the Living Wild project in 2017 and was delighted to be invited to attend an event at the end of last year to show the refurbished and newly installed lighting in the Skyspace.

The original project had substantial Arts Council and other matched funding and involved true partnership working to see it through to successful completion. Originally planned to be built in the North Pennines on the Coast to Coast cycle route, for various reasons it ended up being a Kielder project. Arts curator Judith King and I progressed the early plans with discussions with Kielder partners about potential sites. Peter Sharpe took over as curator part way through the project to completion.

We had a most memorable site visit with James, his elegant wife Kyung and Kielder partners in a borrowed minibus which I was driving. I took a wrong turn somewhere on the north shore, when James never having been to Kielder before was able to get me back on the right road, ending up with cups of tea in Kielder Castle using a wooden box for a table. James loved the last potential site we took him to – a rocky outcrop at Cat Cairn with then spectacular views over the whole reservoir and much of the forest.

Peter and I worked up the project with James, who sent a hand drawn design with very specific measurements for the “space”. I was unfamiliar with James’ work, Judith and Peter had seen several pieces of his work including a temporary piece in the Hayward Gallery in London so knew more of what we were creating. 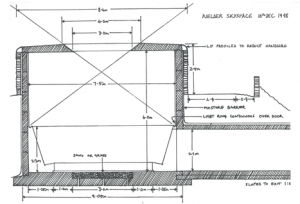 As per James’ drawing left, the Kielder Skyspace consists of a short tunnel that leads to a partially buried circular room with a ceiling containing a central circular oculus (opening) and a ring of seats forming the lower part of the inner wall.

Our work over 2 years included liaising with civil engineers Babties regarding the construction – a little different from their usual work as we asked them to do a large pour of concrete core with traditional Northumbrian stone walling on the exterior in a very remote location just a few miles from the Scottish border. We worked with light technicians for the internal lighting and with solar and wind power consultants to get a power source for the lighting again in one of Kielder’s most remote locations. The project was all consuming but went on hold for 6 months as I took maternity leave for my son Richard, and came back to work in April of 2000 to pick it all up again – with the official opening event held in September 2000.

Peter and I collected James at Newcastle airport the afternoon before the launch. James walked through the arrivals gate, inconspicuous in cowboy boots and a Stetson hat – well he does own an extinct volcano and ranch in Arizona! We drove straight up to Kielder, almost dusk. James chatting all the way about how the Skyspace would work. To me – the uninitiated – I had no clue what to expect. Peter, me, James, Phil (a Forestry Commission ranger) and his dog met Mark Pinder photographer at the Skyspace. The lighting performance began and we were all stunned. The balance of the constant interior light working with the changing outside light creating an ever changing plug of colour in the circular space.

Through the development of the Kielder project, James told us about his interest in the psychology of perception, essentially how our brains work to make sense of the world around us and invent a reality to fit the information that our senses provide. In the Skyspace, a visitor’s experience of colour becomes particularly challenged and the sky viewed from within the space often appears very different from the same sky seen outside. When I take visitors I try to remind them that this is by its very nature an individual experience, and no two people will ‘see’ the same thing. James own quote about his work being , “My work is not so much about my seeing as about your seeing. There is no one between you and your experience”.

The project attracted much national and international media coverage. Pete and I enjoyed taking many a journalist up the (then) rough forestry road to show them the Skyspace – from Monty Don ( who caused quite a stir in the Bellingham tea rooms) at that time writing for Gardens magazine; Helen Pickles from The Times weekending supplement to Waldemar Januszczak for the Sunday Times Culture magazine.

The initial lighting comprised 2000 fibre optics tucked around the rim of the seating. As mentioned the power source was a combination of wind and solar. However, with every project there are issues – and eventually the power became unreliable meaning that while the daytime effect (see below) remained stunning, the dusk performance wasn’t always available. 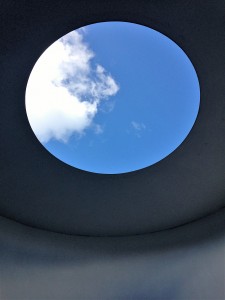 So in spring of 2018 , after receiving an Arts Council of England grant and money from the Henry Moore Foundation, the Kielder Skyspace had a major refurbishment that included updating all of its lighting and power equipment and repainting the upper chamber. The new lighting programme was designed by James Turrell working closely with UK lighting artist Eleanor Bell and differs fundamentally from the original system. The new LED set up delivers a more even and much brighter illumination and incorporates a digitally controlled lighting programme that varies the intensity of the lighting throughout the period of dusk (about 65 minutes in total) starting at sunset each day.

So late last year, the launch event to experience the new lighting was very memorable. By chance both Peter and Judith were there – the original dream team reunited! It had been more than 15 years since I had seen the lighting in working order. The new lighting effect had me spellbound, and in places moved to tears (happy ones) To me, the work is so stunning. It is so simply beautiful. I encourage everyone to take the time to experience the light “performance”. 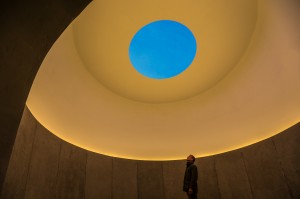 Visitors wishing to drive up to the sculpture can get a key to the forestry barrier beyond the car park; this is available for a refundable deposit from Kielder Waterside reception or Calvert Kielder.
Peter has added a very useful dusk time list to the website so you can plan the best time to visit.