Those who know me outside of the Poets Day Pint beer blog will know that, as well as beer, I have a real love for my native North East of England, and a particular fondness for the Kielder area of Northumberland. 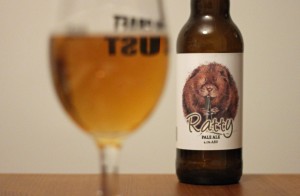 Over the last couple of years, the area has seen the reintroduction of water voles.

Having previously been a common site in the area, they have had a serious decline over the last 30 years, and Northumberland Wildlife Trust, through its Restoring Ratty project, has been at the forefront of the species’ return.

All cute, cuddly, heart-warming stuff, you say. But what does this have to do with beer?

Well, imagine my surprise, when perusing the fridge in the shop at Kielder Waterside, to find bottles of Ratty – a collaboration between the Northumberland Wildlife Trust and the First and Last Brewery, funded by the Heritage Lottery Fund (yes, when you bought that Lotto ticket, you were contributing to the brewing industry – well done, you!).

Of course, I brought one home, hoping very much that it would not be as furry as its namesake.

And finally, tonight, I’m getting to try it. So, what’s it like?

It’s got a very fresh, fruity aroma, probably very unlike what you get if you hold a real live water vole up to your nose, but I don’t intend to test that theory.

And, in terms of flavour, it’s very light. Unlike many pale ales, it’s also not too sharp – personally, I prefer them this way.

It’s not a beer that gives your mouth a pounding when it comes to flavour, but it’s certainly a very enjoyable beer and, because of this mildness of flavour, it’s probably one you could call “sessionable”, which is no bad thing.

​If you like beers like Ilkley Brewery’s Pale Ale, then you’ll love this, knowing you’re supporting a great cause, because a donation from every bottle goes towards the Restoring Ratty project.

This blog post was originally written for the Poets Day Pint beer blog.