Kielder Observatory from strength to strength – aiming for world number one

It’s been one of those monumental years for us here at Kielder Observatory. Nestled in the fantastic dark sky park, which we helped spearhead, we have seen truly amazing growth in visitor numbers over the past few years, but nothing quite like the last twelve months.

It’s no secret, with the facility open almost the entire year, seven days and nights a week, that we hoped for this level of success, but with visitor numbers now in the tens of thousands, travelling literally from all over the world to spend time under some of the darkest skies on the planet, we’re over the moon (pardon the pun) with the story so far.

Having taken on a new office in Newcastle to manage everything from infrastructure to events, and several new full time members of staff, as well as dozens of new volunteers, our visitors have been not only coming, but also returning in huge numbers, with events selling out still weeks or even months in advance.

One of our recent huge success stories was the partial solar eclipse, which we managed to cover not only from the observatory, but also on giant screens all across the UK, and on national TV, again, giving great exposure not only for us, but Kielder as a whole. Millions of people across the UK watching the Sun being partially covered by the Moon in one of nature’s finest spectacles really showcased what we are able to deliver in terms of STEM (Science Technology Engineering and Mathematics), something which the North East has a proud and long heritage in.

Our Director and founder Gary Fildes has been taking the Kielder message far and wide, with hugely successful talks around the UK and even taking a film crew to Pasadena, California to meet up with moon walkers and produce a phenomenal series of films, where he talks to almost every living person who’s walked on the surface of the Moon. This has been shown regularly at the observatory, aiming to inspire the next generation of scientists to, in the words of the last man on the Moon Commander Gene Cernan “never give up on your dreams”.

Our fundraising event late last year, at Newcastle United’s football stadium, where we invited Apollo 13 legendary controller Sy Liebergot, was co-hosted by non-other than Olympic superstar Steve Cram. We managed to raise tens of thousands for the observatory, enabling us to, in the words of NASA “Dare Mighty Things” and take the observatory to new heights.

So now, with support from a host of organisations within Kielder Water & Forest Park , we’re planning the next phase of the observatory. A multi-million pound project to add a state of the art planetarium, huge research grade telescopes, a huge collection of meteorites, better on site facilities for our visitors, and much more, whilst retaining the ethos of sustainability and being at one with the natural beauty which is Kielder. An ethos which again shows that STEM can be so much to so many people.

So our goal… to make the North East and Kielder a truly global force in outreach and education, to make it the UK’s greatest centre for STEM and astronomy, but beyond that, to take the message globally, and one day, to be the world’s No.1 public observatory…

Dare Mighty Things…we know we can.

So it’s back to Kielder with renewed vigour after a fabulous Christmas break. I do mean Kielder – first day back after New Year and I spent 5 hours in Kielder School while the children and teachers were on a training day. 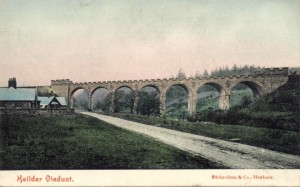 Jo, Julie, Liz, David, Debs and I were hosting a free scanning and heritage story sharing afternoon on the Kielder Viaduct Heritage Project, which is part funded by the Heritage Lottery Fund. David busily scanned an old map of the area pre-Kielder Water, while we talked and captured the stories of villagers about their experiences of the village, railway and viaduct. I even met the man who lives in the former Deadwater Station where the old railway line used to pass through on its way to Riccarton Junction. Tales of coal being passed to the children waiting along the track as the train passed through the valley brought a smile to my face.

We then planned what to do with all of the material we have collected over the period of the project – website links and on-line stories to listen to, plus a possible talking bench and boards, all of course on the Lakeside Way which goes across the viaduct.

Later that evening I met up with the Kielder Parish Council to give them my six monthly update and discuss any plans or events happening in Kielder Water & Forest Park which they might want to work alongside, such as the Kielder Marathon. New events this year include the Kielder Ultra in April and the Kielder Triathlon in July of Iron standard. 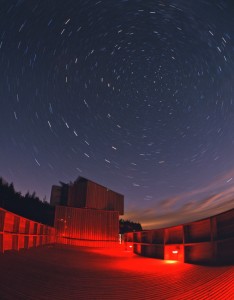 It’s been a busy week for Dark Skies too. Since securing the International Dark Sky Park Status before Christmas, I have been refining the next steps in our dark skies adventure.

The Kielder Observatory goes from strength to strength with events to March fully booked. So with a possible grant from the Rural Development Programme for England, a group of us are working with local communities to develop Dark Sky Discovery Sites.

These would be dotted about Kielder Water & Forest Park where visitors can get out on a clear night from their B&B, cottage or shepherd hut to see the stars with some information boards and leaflets to help. They may be a local event with a trained astronomer to help point the way with some binoculars and telescopes to hand. Then back to the hot choccy and wood burner to warm up again.

To see Jupiter, Saturn’s rings or the newest and oldest stars in the universe, a trip to the fabulous Kielder Observatory is a must. Gary’s been updating me on their plans to make it a 7 day a week place – but more of that to follow.

Following last weeks BBC Stargazing Live, the evening’s entertainment involved watching Dara and Brian and then tweeting with the rest of the fans just reminding them how great Kielder and the Northumberland International Dark Sky Park really is.